RSS feed for this section
This category contains 3 posts

A few weeks ago, there was a discussion board post on formatting sub-objects.  I’d tried to accomplish this a few times in the past, and always given up, but I was curious if either things had gotten better with 15.3 or I’d gotten better at scripting.  Turns out the answer is no and maybe.  A little trial and error and I’ve come up with a reasonable method of accomplishing my goals.  I don’t believe the solution I’ve got here is great (maybe not even good), but it’s an interesting topic and perhaps someone will refine it into something more useful.  As a learning exercise, it certainly taught me a lot.

First, there are no methods for formatting subjects directly (so scratch anything easy off the list).

There is a property on the symbol that controls the formatting of sub-objects (good) but unfortunately, it’s basically a big text string that you have to parse and manipulate.  My first attempt involved parsing that string and manipulating the formatting for particular objects.  That became a bit of a code nightmare and the results during early testing were a bit “erratic” if I didn’t insert my changes into the string perfectly.  Here’s a case where my vbscript skills might have let us down.

So, if there’s no easy methods for manipulating sub-object formatting, and modifying the format is difficult, what’s left?  Well, what I settled on was creating extended attributes for the formatting and then creating a routine to build a new sub-object format string from the ground up based on those properties.  My thought was that by ignoring any existing sub-object formatting, I lessen the chance that my string manipulation creates a garbage format command.  I can write a variety of different routines to set the formatting properties on objects in the model for different purposes … so one routine to make all items modified since the last checkin bold, another to highlight columns that don’t have a definition., etc.  What could possibly go wrong?

So, it turns out he sub-objects that can be displayed include columns, indexes, keys, etc.  Since I’d rather not have to create the same sets of attributes on them all, we’re going to put them on the extensible object metaclass.  This is a great shortcut when you want to do the same operation on a lot of classes.  So, in case you haven’t done this before, let’s walk through it.

I’m assuming you know how to add an extended attribute, if you don’t you can get the official documentation here or follow Joel’s quick example here.  The only thing you’ll need to do differently is select the PdCommon tab and change the filter to “Show Abstract Modeling Metaclasses”.

Once you’ve done that, ExtensibleObject should appear in the metaclass list.  Check the box and hit ‘Okay’. 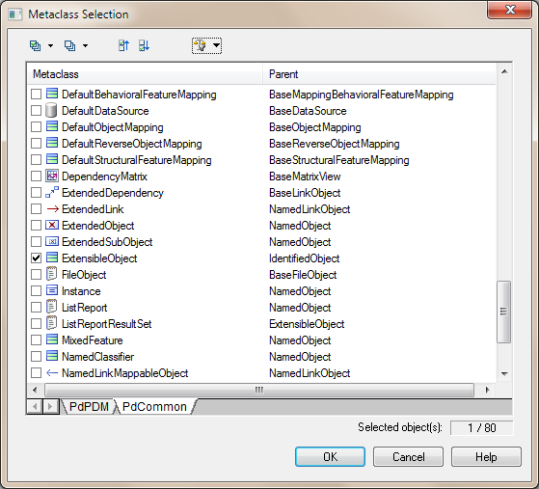 Allright, now let’s add attributes.  When you add an attribute, you’ll notice that Sybase has conveniently provided predefined types for Font, Font Size, and Font Name.  They all provide the font dialog box as a handy mechanism for selecting the attributes.  Less convenient , even though all of them show you a dialog that allows you to select the font, size, style and color, none of them return all of those values to the extended attribute.  Font will actually give you name, size and style.  Font Name returns only the name, Font Size returns the size (duh) as a number.  None of them return the color, even though it’s an option on all three dialog boxes.  Downright annoying, the syntax for storing the font for the predefined attributes doesn’t match the formatting used to set the subobject format.

So, if you create custom attributes for Font and Color – the smallest number of attributes necessary, and just concatenate them with a comma in the middle (customFont & “,” & customFontColor) you’d get something like this:

The subobject string for specifying the same value is

Probably a case of two programmers doing their tasks without recognizing there was reason to make them match (or even anything to match to).  Annoying but not the end of the world.  However, if anyone from Sybase reads this, a font property that returns the color value and a subobject format string that matches would be greatly appreciated.

More annoying is that if I use just font and color, I’ve gotta break up the font property (did I mention I dislike string parsing?) and reassemble it in a different order (and with some substitutions to turn Bold into B).

So, here’s what I came up with.  2 extended attributes:

Keep in mind, I could’ve gone with just a string, but this solution allows you to set the properties manually using the built in font dialogs instead of having to rely on scripts or memorize the sub-object formatting properties.  Here’s the code for my calculated attributes.  I’m sure I could’ve made this a bit shorter, but this isn’t an obfuscated C contest so I’ve tried to break it down a bit more than I might normally.

So, now we have all the individual pieces, we just need to assemble them.  I’ve gotten as far as columns and keys.  Obviously there are other properties available, but we’ll leave that as an exercise for the reader.  If anyone would care to finish this, I’d be more than happy to publish the finished product.

So, first create a custom method.  Here’s the logic.  For each table symbol in the active diagram find the object it represents.  Then loop through the columns and keys collection and get the customFontFormat property.  Use these to build a new format string for the symbol.

Create a menu item on the menu item to call or new method and this part is done.

Step 4:  A Method to Set Formats

So now we can format subobjects for a table if there’s a custom format specified – and you can set them manually by editing the custom properties we defined.  Obviously that’s now something we want to do.  What’s left?  A method or methods to set the sub-object format properties on objects based upon some condition.  While I think columns changed or added since the last checkin is the obvious candidate for this, I don’t know if you have a repository and that’s a little hard to test.  So I’m going create my script to identify columns which don’t have a comment.  The thing I like about this particular approach is I can re-use the apply formatting method and create many different methods to set the formatting properties on sub-objects.  So here’s my method:

Now we create a menu item again, and we’re good to go. If you’d like the complete code and a sample model, just download subObjectFormatting.pdm below.

Posted by Rich Kier ⋅ June 22, 2010 ⋅ Leave a comment
A friend just found me quoted on the web, which is surprising considering how little I say is actually useful.  I’ve been participating in  Steve Hoberman’s design challenges for about a year and if you’re a data modeler (good bet if you’re reading this) they’re a great way to exercise your brain a bit.  Steve posts a question monthly and then compiles the results into a nice little summary which he publishes on his own page and also on the pages of some of your favorite websites.
It’s my blog, so here are links to the articles where I appear.
Information Management
TDAN

Adding Seed Data to the After Tab

Another interesting post on the PowerDesigner group today.  Mark wanted to add seed data to the after script on a table, which is fairly common (we do it all the time); but with a brilliant twist.  The goal is to store the seed data script in an external file and have it end up in the DDL when we generate the database.

I thought this would be pretty easy by tweaking pieces of code I already, but there were a few gotchas.

1. You can’t directly read the contents of an external file within the PowerDesigner VBScript methods (as far as I know).  It may be possible to write your own routine to process the file, but I found an easier (at least for me workaround).

2. My workaround for getting a the file contents ended up converting the file contents to hex (sort of).  In a rather bizarre conversion, what I ended up with was a big string showing me the hex values representing the original file, but with a carriage return/line feed inserted periodically in a weird word wrap.  Since VBScript doesn’t have a convenient way of converting hex back to ASCII, a Google search got me most of the answer, but I ended up having to strip out the carriage returns first.

Anyway, here’s the solution… suggestions for improvements are always welcome (I plan on adding a toggle so I can include seed data when I’m generating an empty database and omit it when I’m altering an existing database which already has the seed data present).  As always, I’m doing this with an extended model file rather than stand alone scripts so I can get a little more control.  If you need information on how to create and work with extended model definition files, see Sybase’s documentation here.

Okay, this isn’t technically necessary, but it sure makes testing easier. So, I created a menu on the table meta-class and put the method above on it. Now I can add seed data to an individual table with a right mouse click.

Again, I could have skipped the table, but we get a lot of versatility doing it this way. Here’s the method code.

If you’re not familiar with selections and ExecuteCustomMethod, then please see my earlier posts.  You won’t regret it.

Again, not strictly necessary, but it’s only a few mouse clicks for a little extra versatility.

The BeforeDatabaseGenerate trigger fires before you generate your DDL and is the piece that makes it all work automatically.  Here’s the code:

Now, if you’ve done all the work above, here’s a completed PDM file that has an extended model definition with all the code above, pre-made.  I know I could have put this at the top, but really, would you have learned as much?